The artist lived and worked for a decade in a caravanserai near Petra.  Her paintings from that period are now in private collections in The Netherlands and abroad: many collectors have agreed to lend her work to the museum for the exhibition. The museum has given Bierenbroodspot three rooms for this Petra retrospective, shown along side her private notes, photographs, and a new series that she's working on at this moment, 'Memories of Petra'. 9 October 2013 - 23 March 2014 When Bierenbroodspot saw Petra, "it was like stepping into one of my own paintings. There was the shock effect of the colours, the shock of the buildings, the rawness of the rock and the sand. It was a tactile sensation, almost a physical encounter.... "I always wanted to walk into my own landscapes, to know what was there behind the columns, behind the walls that I was painting. That happened at Petra: imagine the stripes of purplish-reds going through the doors into the tombs. I could follow them inside; they run along the floors, up walls, across the ceiling. So I saw the facade from the other side, in a space without up or down." [from Judith Weingarten, /Sign of Taurus: The Archaeological Worlds of Gerti Bierenbroodspot,/ Waanders, 1998] 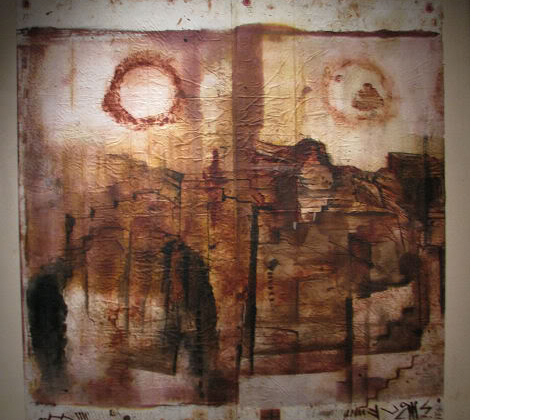 NEW SHOW: BACK TO THE FUTURE

Bierenbroodspot at work in her studio in Tuscany, inspired by the landscape & the countryside!